So I took apart my stock stereo amp. I was amazed that it's actually a true 10 channel amp. Each speaker in the car is individually driven by its own amplifier and actively crossed-over. There are no passive crossovers anywhere.
BMW 8 368 230
UTLOEWE HIGH-POWER

Here is the inside with the cover removed. 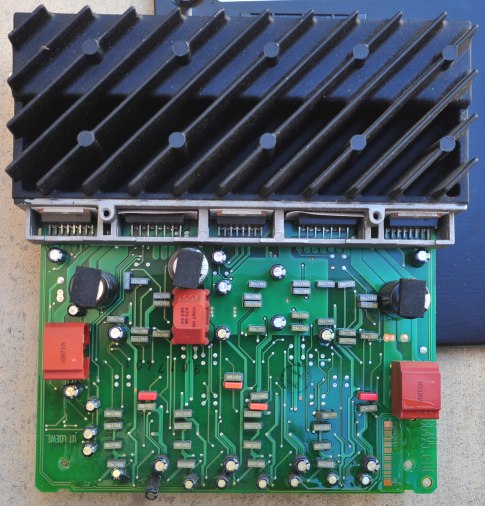 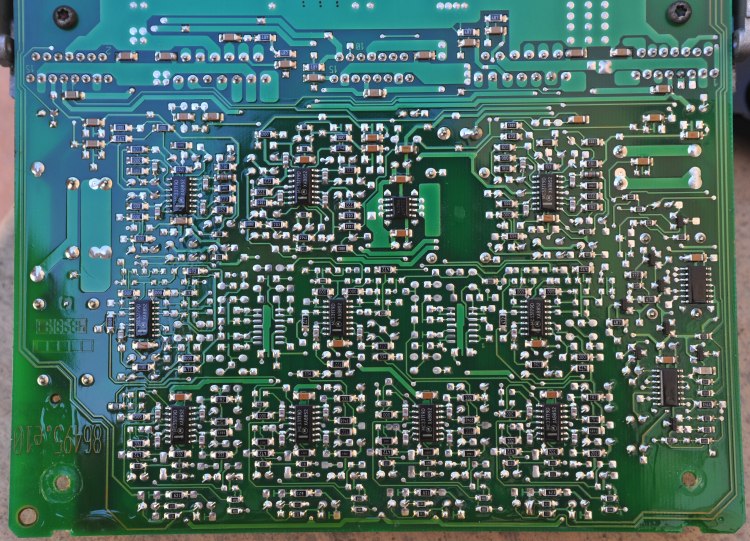 After doing a lot of bench testing and reverse engineering I have figured out most of the amp.
The front channels have a high pass filter at the differential to single ended input circuit which limits the low end to 23.6 Hz with a -6dB/octave slope. This is good in a way, it eliminates the low low end which the speakers can't reproduce anyway which will make it easier on the amplifier chips and lower overall distortion. The front woofer outputs goes from 23.6 Hz imposed by the input filter all the way up to 430 Hz. At 430Hz the fall off is -12dB/octave. For eq'ing the designers added two notch filters on the woofer output channel. One notch filter is at 190 Hz and the other is at 550 Hz. The 550 Hz notch is after the 430 Hz low pass filter which makes the roll off even steeper than -12dB/octave. Next is the mid-range output. It goes from 1.25 kHz to 5.35 kHz with -12dB/octave slopes on both ends. Notice that the woofer starts rolling off at 430 Hz, but, the midrange doesn't start coming in until 1.25kHz. There is a 820 Hz hole in there. Ok, now the tweeters. They start at 6kHz with a -12dB/octave slope. The components in this filter were not chosen for flat response. For some reason therefore there is a 0.5 dB bump just above the 6kHz crossover point. Again there is a hole between the two outputs. Midrange rolls off at 5.25kHz, but, the tweeter doesn't start until 6kHz. In the plot below I have normallized the outputs so they appear