Some information on the BMW EWS-Immobilizer
December 5, 2015

I've been seeing a number of posts on the forums and I've gotten at least a dozen calls from E46 owners that are having problems with their key not starting their car. In particular the EWS - Immobilizer not allowing the car to start. The keys that came with the car have a small transponder chip in them (even the valet key which doesn't have buttons) which gets read by the car when the key is in the ignition. The transponder gets it's power from the EWS pickup coil located around the ignition switch. The code sent by the transponder is picked up by the EWS coil and compared with a list of good codes programmed from the factory. If it's not on the list the EWS deactivates the starter motor. Everything will still work, radio, lights, doors, windows, everything. Just not the starter motor and you can't push start the car either since it tells the DME not to fire the injectors. In some cases the car will intermittantly start with only 1 of the keys, the other keys start the car fine. In this case the problem is repairable with my key repair service. Be sure to let me know that the key is a no start key. There is a lot of mis-information on the forums, like it's the key fob battery, no the key fob battery has NOTHING to do with the EWS system and starting the car. It only powers the keyless entry portion of the remote (lock, unlock and trunk release functions). Another one is recoding the key to the car will help (See recoding procedure), NO, No it won't. The recoding procedure only codes the general module to the key for keyless entry, again it had nothing to do with the EWS system and will not help. The only place to get a new working transponder is from the BMW dealer in a new key. Below is an E90 key that I tore apart. The EWS transponder coil is the black rectangle on the center left side and the EWS chip is the big rectangular chip in the upper left of the right picture. The E90/91/92/93 key DOES NOT require any key sync to get the remote to work. It car does not have a general module and the remote is permanantely sync'd to the car. Again there is no key sync procedure. Anyone who says their is is wrong!. Only the older cars like the E38, E39, E46, E52, E53, E83 and E85 have keys that can be resync'd. Rectangular keys like the one below do not have a key resync procedure and this also goes for diamond shaped keys for E60 or E70. 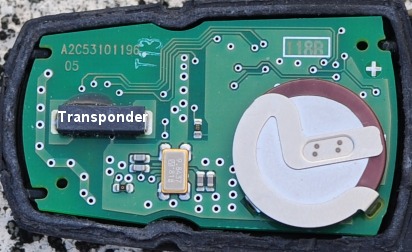 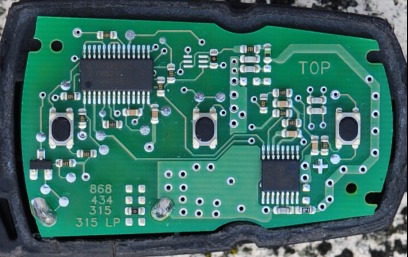 For the first generation diamond shape key (E39, E46, E52, E53, E83 and E85) the EWS transponder coil is #7 in the picture below and works in conjunctions with several other components on the board to support the immobilizer function.

If you are looking for a new key that will be able to start the engine you will need to buy from BMW. Any of the keys will start the engine, plastic wallet key, valet key or master (remote) key. If you have the plastic wallet key or the valet key I might be able to turn that key into a remote key for a lot less than the dealer. Upgrade to remote key.