If you find my web site helpful and would like to make a donation please click the PayPal link below. Money will go to making this web site even better.

Some information on the BMW FZV Antenna Amplifier

I just finished doing a little testing on the FZV antenna amplifier. I'm doing this because there have been a few people telling me that they can't code their key to their car (See recoding procedure) and are wondering if replacing the relays will help. NO, it won't help. The relays will only help in cases where one or more door locks don't unlock (and in very rare cases won't lock). If your key doesn't start the car please check out my EWS web page. If your car doesn't do anything when the key fob buttons are pressed, no locking, no unlocking, no trunk release, no interior lights (when unlock is pressed), no alarm beep then recoding may help, but, first check one thing. Get in the car, close all the doors, put the key in the ignition turn it to On then turn it back to Off. Open the door, the car should beep at you to tell you that a key is still in the ignition. Now remove the key, if the car continues to beep then there is a problem with the key sense switch in the ignition. If a key is sensed in the ignition it will inhibit all key fob functions. If the car stops beeping when the key is removed then ry recoding the key, but, only if the car does not respond to any of the key fob buttons. Note that if the car continues to beep after the key is removed DO NOT perform the key recode procedure. The car won't accept it and performing the button sequence on the key will unsync the key from the car. If the car intermittantly responds to the key fob or if there is not response and key recoding didn't help then there are several possible causes. It could be the key fob itself or the battery, it could be the antenna on the rear windshield (in the rear view mirror on the convertible) it could be the FZV antenna amplifier, it could be the GM5 or the wiring. So far I've only seen problems where the FZV antenna amp was bad and replacing it solved the problem. I've heard on the forums that replacing the battery has solved problems for people. A lot of people incorrectly assume that it must be the battery. If the car only fails to LOCK and no interior lights come on when lock is pressed then it could be the battery. A low battery condition causes problems with LOCKING only. A bad battery will cause no functions to work, but, rarely will a battery go from working properly to bad in a short period of time. Even the low battery condition can come and go over the course of weeks due to battery temperature, with cold temperatures making the problem worse. If you still suspect the key is bad and want it fixed or want the P/N for a new one then go over to my E46 key web page.

Ok, so let me start off with a brief explanation of how the whole system works. When a button on the key fob is pressed a digital message is modulated on a 315MHz (433MHz on some cars) carrier and transmitted like a little radio station. An antenna on the rear window glass (in the rear view mirror on convertibles or in the tailgate lid on wagons) receives the RF signal and sends it to the FZV antenna amplifier located on the C-pillar usually on the left hand side (on convertibles it's located in the rear view mirror housing). Here it is on my 4-door with the C-pillar cover removed. 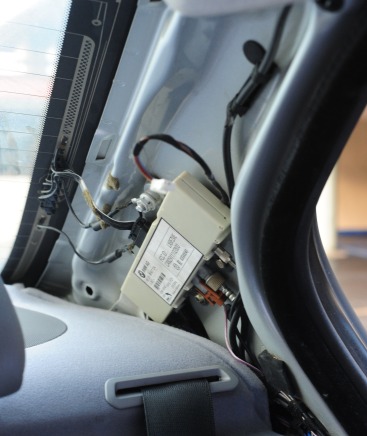 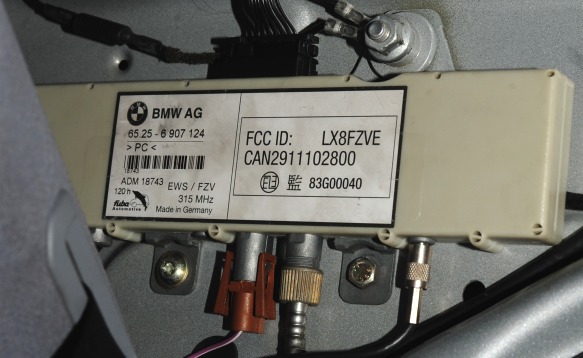 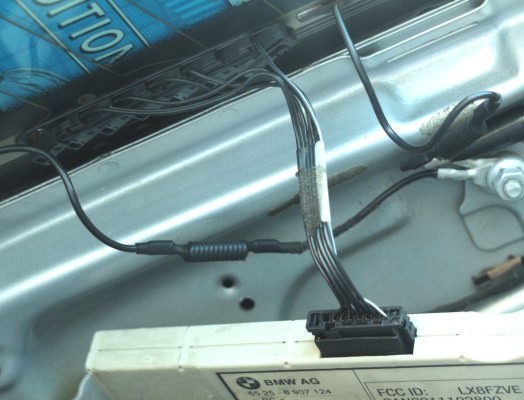 The FZV antenna amplifier demodulates the signal and sends a +5V digital baseband signal to the GM5 (aka ZKE5) module. The output on the FZV module is X1143 pin 3 and input on the GM5 module is X253 pin 49 (X253 is the center connector on the GM5). The wire color is blue with a red stripe. If you are looking at the BMW WDS, the FZV antenna amplifier is module "N8" and the GM5 is module "A1". Below are a couple scope captures looking at the baseband signal out of the FZV module. The picture on the left is the whole message. It varies in length from press to press from about 0.19 seconds to about 0.32 seconds. This line normally sits at +5.0V and drops to nearly zero to indicate presence of a RF signal from the key fob. If you don't have an oscilloscope you can check for the presence of a signal using a simple DMM. If you use the DC Volts scale and measure from this signal to ground you will measure +5.0 Volts and when a button is pressed the line should drop to a minimum of +2.5 Volts for a fraction of a second. Don't worry if you don''t see +2.5 Volts, but, instead see some other number that is between +2.5 and +4.5, this is fine. It all depends when the meter sampled the signal. You can also set the meter to AC Volts. In this setting you will see zero volts most of the time and it will jump to about +2.5 Volts when a signal from the key is received. If you see that you are getting a signal on this line and following the key recoding procedure doesn't work then it's probably the GM5 module, but, I think this would be a very very rare failure mode. More likely you will not see a signal and the problem is in the wiring, the FZV antenna amplifier module or in the key fob. If you have had a problem with your key fob not working with the car and found out what was causing the problem please shoot me an email (scott@bmwgm5.com). I'd love to know what resolved the problem in your case. 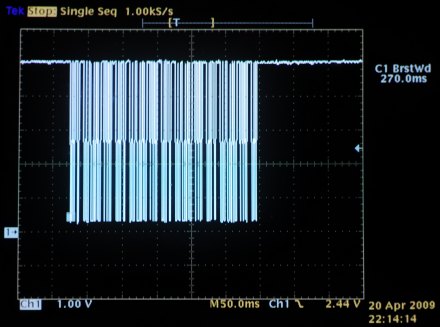 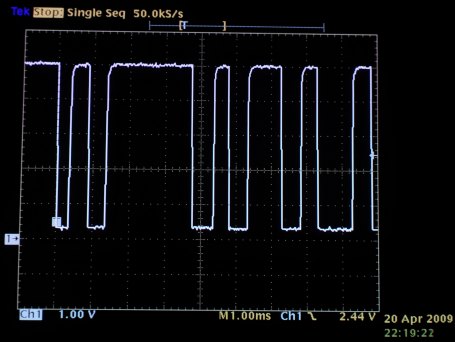 New Information:
Jez just emailed me to say that his problems are fixed. In his case the car stopped responding to the keys. Multiple attempts to reprogram the car to the key didn't work. He measured the signal going into the GM5 from the FZV and there was no signal, just 5V with no dip when the key fob buttons are pressed. He finally located a FZV for his E46, 3-series wagon at a salvage yard and installed it. Presto everything works fine now. Key reprogramming worked the first time, alarm arms & disarms, remote trunk release works, remote door locks work. Problem was not the GM5 module or the key fob battery like he initially guessed.
Thanks Jez for your story.